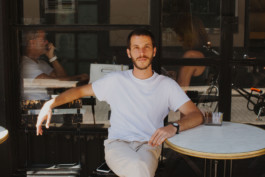 In the rivalry between north and south Tel Aviv, which side are you on?

— I’m a south guy. I’ve lived in Tel Aviv for around ten years, this is my eighth apartment, and almost all of them were in the southern part of the city. I like to wander around narrow Yafo streets on my motorcycle. I find Yafo to be younger and more alive, dirtier in a good way — unlike the north which is too organized. In the northern part you need to behave.

Your parents are from THE NetherlandS but you were born here. Does being sabra mean anything to you?

— ‘Are you a sabra?’ is a question that doesn’t really exist. Who is the true Israeli? The white Ashkenazi guy or the one whose parents came from Morocco or the Arab guy who was here first? People in Israel have to prepare for differences even if they are racist inside because that is the reality here.

But the question that does exist is ‘Are you a real Telavivian?’ People who were born and raised in Tel Aviv are very unique creatures, I think. They witnessed everything very young. I’m from Kfar Saba and for me experiencing life in a big city, drugs and tattoos, dressing differently and coloring hair — was something I had to achieve; for them it was just a playground. In a way, it made them more of the freaks, they don’t get excited by things that I find very exciting. For them it’s just so basic that they have to go further. Some end up living abroad and looking for excitement in Berlin or New York. And some just get lost. So if I were a father, I’d prefer my kid to spend his childhood in a small town or a village, I’d like him to experience the city when when he gets ready for it. Tel Aviv is too extreme for a playground. 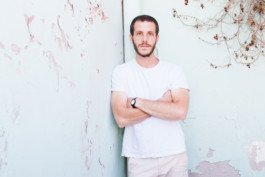 What's so special about nightlife in Tel Aviv?

— The nightlife here is happening outside. I’ve had three bars and I know that the real party is on the streets and on the beach. And the same thing with gay culture: I’ve been to Europe a lot and the USA, and this is the only city where being gay is so ‘outside’. You walk down the street and a man will look at you, checking you out, and you may turn your head and look him straight in the eyes because it’s all part of the party. And you can kiss your boyfriend and walk hand in hand freely, which I don’t feel comfortable doing in Amsterdam, for example.

Gay — The best word for gays in Israel. “Homo” sounds offensive, so don’t use it.

How DID a city in a very religious and conservative country become a gay capital?

— The first reason is that it’s a country of immigrants. From the beginning of the state, people had to be open because everyone around was different. It made our minds more accessible to new ideas. And most people here don’t care — do whatever you want, just be a good citizen. That’s what gay people do: we pay taxes and we go to the army which is a very important part of being an Israeli. That’s why we’re accepted.

The second reason is even more exciting — children. There is a revolution happening in Israel. And it’s called children. More gays have children here than anywhere in the world. Kids are essential for Jewish culture, so our mothers and grandmothers pressure, ‘OK, you’re gay, I don’t care, just give me grandchildren!’ And we do and here comes the true acceptance which gay people couldn’t get for centuries. Because if you have children you’re a true part of the society.

The USA is the only country in the world where Israelis can have a surrogacy procedure, and more Israeli gay couples undertake it there than American ones. Tel Aviv municipality states that 35% of children in city kindergartens are from gay families. That’s incredible! But on the other hand that’s where it actually gets bad.

Coccinelle [koksinel] (Which means “ladybug” in French) was a stage name of a famous French drag queen in the 60s. In Israel this term reforms to transgender people. Within the community they use the word among themselves the same way African-Americans do with the word “nigger”. But they say, ‘We can call ourselves Coccinelle, but you can’t!’. So never use it if you aren't a part of the community.

— This is the beginning of a ghetto. We have to be very careful. Israel is a conservative state, so gay people feel that Tel Aviv is the only place for them, outside Tel Aviv we seem lost. And unlike the US, everything is so close here that the gays from the whole country just come to live to Tel Aviv. The city is very expensive, we waste our money on landlords, but even when we see good job opportunities in Haifa we think twice. For the last two years I’ve been a chairperson of the gay organization Aguda, and what we are trying to do lately is break this limits and tell gay people — stay where you are, throw gay parades and open gay centers everywhere. Don’t come here because otherwise we’ll soon find ourselves in a ghetto disconnected from the rest of the country and the rest of the world. And if we want for the next generation to live in a world with less homophobia, we need to be everywhere.

Goosh — An informal and nice way to address someone. For example, ‘Hey, goosh, are you coming with us?‘ 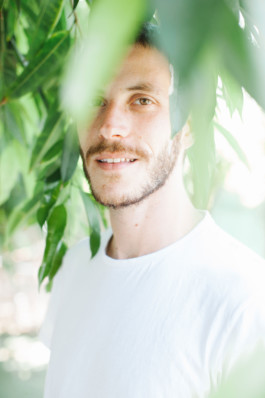 Have you ever experienced homophobia in Israel?

— I believe that homophobia is something we attract, of course it exists in Tel Aviv or Moscow or any other place. The question is whether you let it get to you, whether you talk about it, think about it, and get afraid. The same story with being a Jew outside Israel: how come in the same place some people say they face antisemitism on daily basis and others — not even once?

In my whole life I have only experienced true homofobia twice. The first time it happened I was 16 travelling in Amsterdam with my friends. I was the only boy in the group. We felt so cool walking around with our joints, and then someone shouted to me: “You homo!”. I was shocked, Amsterdam was supposed to be a capital of freedom! It had never ever happened to me in Israel even though I was openly gay since high school. The second time was in Yafo, I was kissing my boyfriend and a car stopped. The Arab driver wanted to say something offensive, but I guess he didn’t speak Hebrew fluently so it turned out to be very polite, ‘Don’t do it in Yafo, do it in Tel Aviv, otherwise I’ll get angry’. And I thought, ‘This is the way you’re threatening me? That’s so cute!’

I do some lectures in high school and I always say to the students: “Listen, children are making fun of each other because they are fat, because they’re tall, they’re short, they’re black or white or wear glasses or are gay. It’s all the same. But if you pay so much attention to it, say that it’s horrible homophobia — you are going to lose. Just answer ‘OK, so you called me gay and I can call you fat — it’s all the same’. Then you don’t get insulted”.

Wedge — A slang word for “face”. For example, ‘What a pretty face he has!’ — [HaWedge shelo haval al-ha-zman]. Also a name of an Israeli gay website www.wdg.co.il

What would you change in Tel Aviv?

— In the last few years some people have come to think of Tel Aviv as of something disconnected from the rest of Israel, like we don’t understand it and don’t care about it. I don’t agree, I think it’s not true. We are a part of making Israel better and that’s what Tel Avivians should understand: we’re living here not only to enjoy ourselves but to spread our ideas and to do something for the country. If we become the only liberal and secular city in the country, we will loose Israel.

• Shpagat is my place. And it’s now the only bar in Tel Aviv that defines itself as a gay bar.

• Kuli Alma is one of the coolest places in Tel Aviv. In old Hebrew it means “the whole world”. I took part in running it for three years and I guarantee it brings gay and straight, black and white people together and the music is great!

• I like the Wishing Bridge in Yafo. I think it works, some of my wishes came true immediately after I asked for it.

• Of all the Tel Aviv beaches I like Ajami beach in Yafo, it is quiet and lovely. 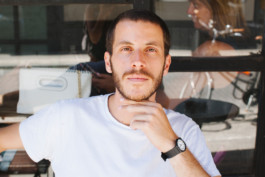 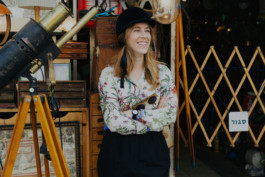 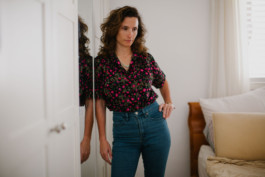 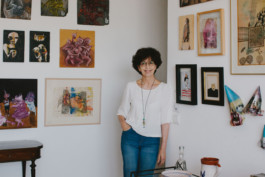