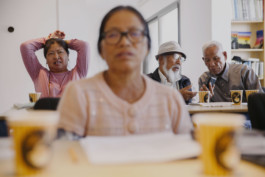 Why did 3000 Indians convert to Judaism, and how did they end up in Israel? 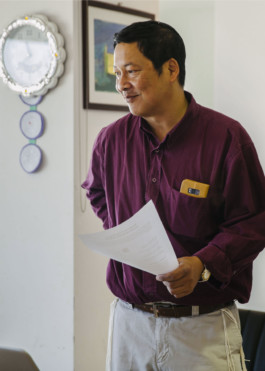 In India he raced a motorcycle, listened to heavy metal and even had a pet bear. Now his home is in the Israeli settlement of Kiryat Arba on the outskirts of Hebron. He is the Rabbi of the Bnei Menashe community there. Rav Shimon Gangte shared with YOMYOM how these Indians ended up in Israel and what it feels like to live here.

In the Israeli settlement of Kiryat Arba, one can find what appear to be some very untypical Israelis — Asians who, in terms of dress, look like any other traditional, religious Jews. They are the “Bnei Menashe” — indigenous Indians who consider themselves to be the descendants of the ancient lost tribe of Menashe.

In the 8th century BCE the northern Kingdom of Israel, where ten out of the twelve ancient Israelite tribes lived, was conquered by the Assyrians. The majority of the Israelite population was deported and resettled in different parts of the Assyrian Empire in what is known as the “Assyrian Captivity”. All modern Jews are believed to be the descendants of the two remaining tribes of the southern Kingdom of Judah — Yehuda and Benjamin (as well as the priestly tribe of Levi, which did not have land). The aforementioned 10 tribes from the north are referred to as “lost” because nothing is known for certain about where they ended up. In different parts of the world, mainly in Africa and Asia, there are different ethnic groups who consider themselves to be potential descendants of these “lost tribes”. For example, the Lemba in Zimbabwe and South Africa and the Pashtun in Afghanistan. 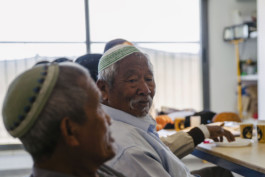 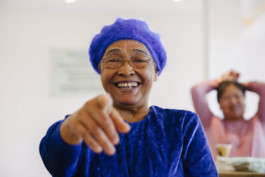 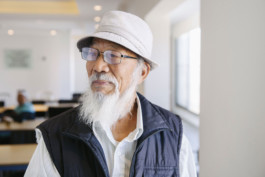 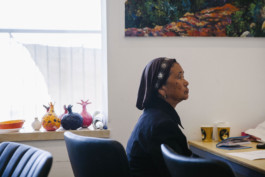 The “Bnei Menashe” include up to 7000 people in two states in north-eastern India: Manipur and Mizoram. People in this small sect within the local Christian population considers themselves to be descendants of Manmasi, “the lost son of the God”. They would come to believe that this legendary “Manmasi” was actually the Hebrew “Menashe”. Some of their religious and cultural customs closely resemble Jewish ones, such as a weekly day of rest on Saturdays and a strict prohibition on eating pork.

In 1981, Israeli Rabbi Eliyahu Avichail, a Zionist rabbi who researched and wrote extensively about the lost tribes, visited the Bnei Menashe in India and recognized them as descendants of the lost Jewish tribe of Menashe. He assisted the first groups of the community’s youth move to Israel, where they underwent the process of giyur to officially convert to Judaism. For many Bnei Menashe, the move represented a radical change in lifestyle. This change was especially drastic because most Bnei Menashe had belonged to a tribal society and lived in poverty in India. In 2005 the Sephardi Chief Rabbi of Israel officially recognized their Jewish roots, and in 2006 they were all allowed to make Aliyah if they wished. However, upon arriving in Israel they are still required to convert to be officially recognized as Jewish by the Orthodox Rabbanut.

The relationship between these north-eastern India tribes and the ancient lost tribes of Israel, however, remains doubtful. Most on the anthropologists believe that Bnei Menashe developed their self-identification under the influence of the Christian preaching. DNA tests seem to show no evidence of Middle Eastern roots of the Bnei Menashe or any genetic relationship with modern Jews.

Rabbi of the Bnei Menashe community in Kiryat Arba

«My family was somewhat privileged. My father was the mayor of the town in Manipur where we lived and my mom was a midwife. My parents were not very religious, but we always knew we were sons of Manmasi. If there was an earthquake, my mom would say: “God is looking for his lost sons”. And we would get on the roof and shout, “Here we are!”.

My parents sent me to Israel because I was a wild teenager and always got into trouble. I got into fights, I had problems with the police, with gangs, I was shot twice… but I didn’t want to leave, I liked my life in India. I had friends, I raced a motorcycle, I played sports, listened to heavy metal and played the guitar. I also had the impression that if you came to Israel you had to work hard — which turned out to be true. But my mom was really afraid for me. She told me, “Go, if you don’t like it there, you can always come back”. By that time, my sister had already been living in Israel for three years. She belonged to the first group that Rabbi Avichail helped make aliyah. So I went to Israel. It was 1984, I was 18. 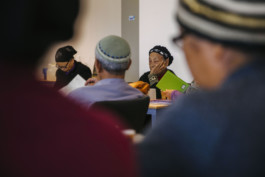 They brought us to Gush Katif. We came in the beginning of August and it was 38 degrees celsius. In India, in Manipur, where I was born, it never gets more than 30! So I didn’t know what real heat was. We worked in a greenhouse; it was very very hot inside with no fresh air, it was like a big oven… And in the evening we’d learn Hebrew and Jewish laws.

About half a year after we arrived, a rabbinical court came to Jerusalem to decide whether we were officially Jews. I had long hair, which I refused to cut, and wore a t-shirt with the Metallica symbol. The head of the court, or beit din in Hebrew, said, “What? He wants to be a convert?! He’s not serious, look at his hair”. They grilled me with questions, which I answered — all of them. Rabbi Avichail told them not to judge a person by his appearance. I passed and became a Jew, officially.

By that time, I didn’t strictly observe all of the laws, but my teacher from Gush Katif told me that I needed to go to yeshiva and found me an English-speaking yeshiva — Aish HaTorah in the Old City of Jerusalem. I still had long hair, but thank God, all of the teachers there were very patient with me and didn’t push me. By the age 23, 24, I cut my hair and began wearing regular clothes. Then my teachers in the yeshiva told me that I should go into a rabbinical program. By that time I was already living a religious life, of course… so, this is how I became a rabbi.

Then I met my wife. We went for a date, and another date, and then another… and eventually I proposed. I was shaking like a leaf, and was secretly hoping she’d say no, but she said yes! I wasn’t really into girls or romance in my youth. I was a rough guy, I didn’t have time for girls. It was a big step for me. My friends were all married by that time. I kind of gave into peer pressure. 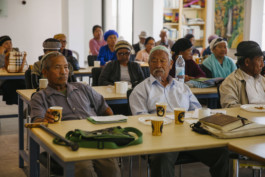 I’ve been living in Kiryat Arba since 2004. It’s one of the biggest communities of Bnei Menashe in Israel, around 1000 people. It’s very challenging being here, because it’s pretty much in the middle of nowhere. There’s not much to do and the youth always need to release all of their energy. They don’t really have a place to do that here. So it’s hard to protect them… to set a good example. Sometimes the kids have problems in school, with the law… and all the new technology is a problem too. Kids just want to spend time on their phones, and they’re exposed to all kinds… all sorts of videos that you don’t want them to see, like pornography, violence, etc. Once kids start to become less religious, they become more and more rebellious. And I have a problem here. Because I was like this once. I know how it is. I can’t just tell them, “don’t do this, don’t do that”. I try to explain to them that there’s a limit to what you can do, and there’s a difference between here and India. Here you break the law and you’ll go to prison.

The reason for my own rebellion, I guess, was that we don’t look Indian. The mainstream Indian people would say, “You guys aren’t Indian” and would make fun of us. In India someone from Nepal or Bangladesh is looked down upon and despised. It made us really angry. We’d beat them up and then they’d come looking for us. We were kind of trying to protect our identity, I think. And it’s the same here in Israel again. You go to Tel Aviv or Jerusalem, and people tell you, “You guys aren’t Jewish! You look Philippine! Why are you wearing a kippah?”. Here, people don’t want to beat you up, but still you feel a sense of… racism, I guess. That’s why we prefer to live in small settlements where everybody already knows who we are and people don’t ask stupid questions.

I still love music. I have 12 guitars at home. If I were a millionaire, my house would be full of guitars. I still remember all the songs of Deep Purple by heart, and I can play them. I like Scorpions, AC/DC, Metallica. Several years ago I had an operation for carcinoma, and the surgeon who operated on me was a Russian guy. Just before the operation his phone rang, and it was a Metallica tune. I said…“wait a minute, I want to listen to the song!”. But he laughed and told me to shut up and lay down.

I had a bear at home in India. Hunters killed his mom and brought him to my father as a present. I raised him. He slept with me in the bed, and would steal my blanket. I would freeze! Some kids have teddy bears, but I had a real one. He even ate with us at the table. But eventually he became too big and the neighbours got frightened, so we had to take him to the zoo. There were three of us — me, my father and my bear. I remember how the zoo people put him in the cage with other bears. We both had tears in our eyes, my bear and I…

If I could, I would move to some completely isolated place high up in the mountains and I would build myself a shack, live there and do nothing. I’d play my guitar and maybe do some gardening, and that’s it!

Where did I feel happier, here or in India? To be honest with you, my life… it could be happier.» 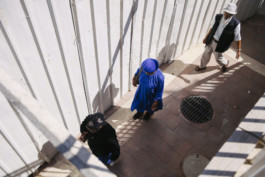 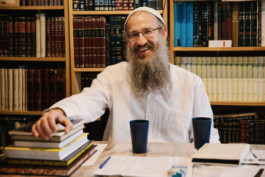 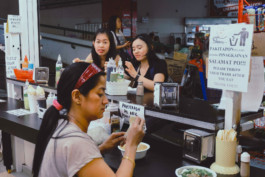 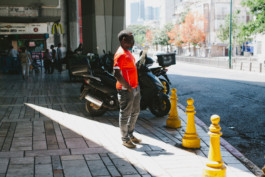 © 2018 YOMYOM, ALL RIGHTS RESERVED
MADE IN TEL AVIV WITH LOVE